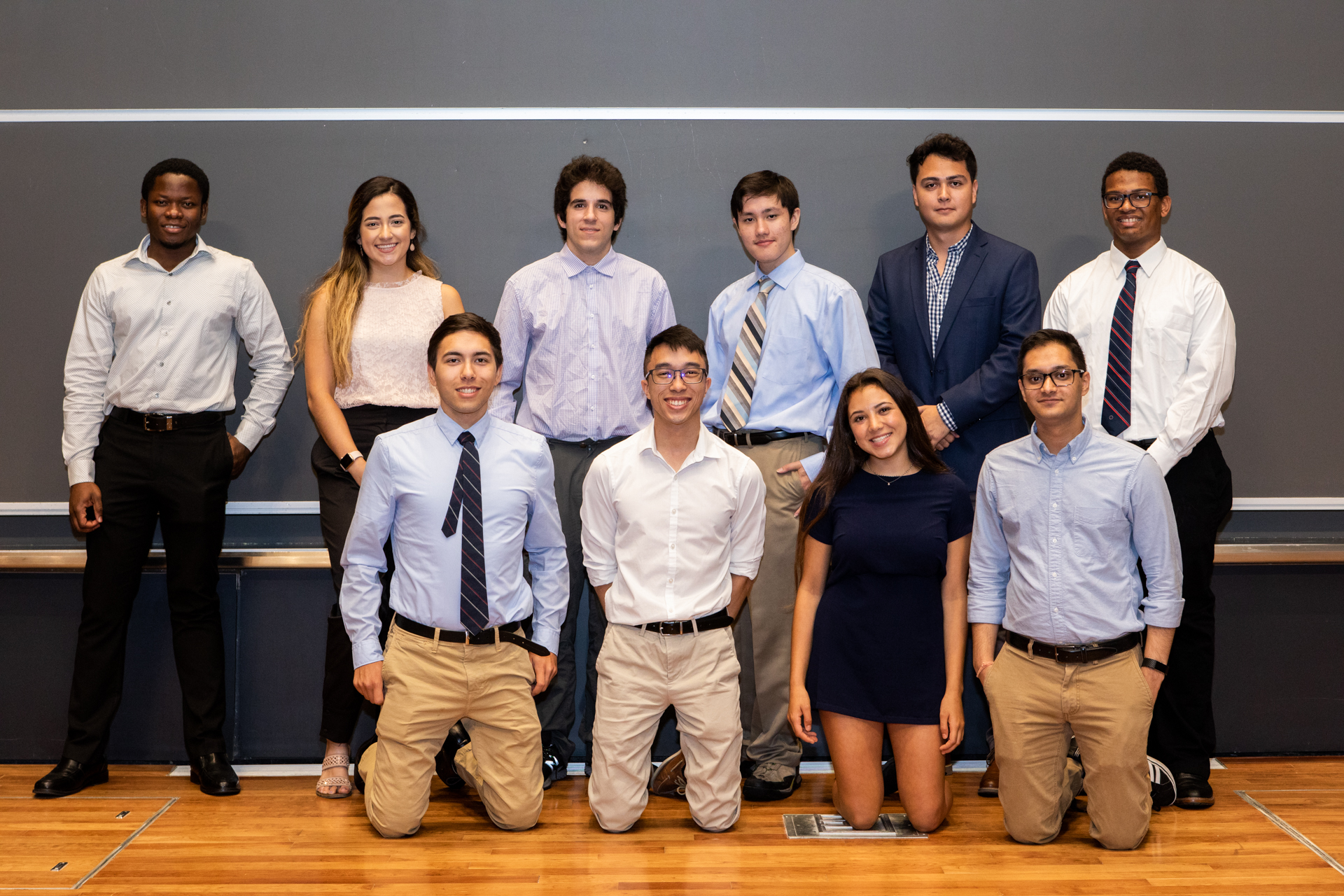 Soft robotic gripping systems can manipulate a wide range of objects. The  softness of the material and the compliance of the mechanical gripping are, however, not ideal for every application. An improvement to soft robotic gripping is to implement flexible force-sensors that can provide immediate feedback in order to adjust the adhesion between the soft gripper and the object. A common approach for the fabrication of flexible force sensors is capacitive sensing. However, the capacitances produced by these devices are very small (in the order of fF, pF), which is challenging for data interpretation. In this study, flexible 10x10mm and 25x25mm parallel-plate capacitive sensors were fabricated and tested. A relation between the applied force to the sensor and the corresponding change of the capacitance was established using mechanics of materials theory and capacitance theory. The sensors were fabricated using Polydimethylsiloxane (PDMS) as the dielectric material. PDMS was also used as the substrates to hold copper electrodes that were cut using a mechanical cutter. The capacitances produced by the sensors ranged in between 1-20pF for dielectric layer thicknesses of 400μm-1.2mm. In order to measure and interpret the changes in capacitance, multiple electronic measuring systems were explored, including a 555-timer circuit, a capacitance-to-digital converter, and a voltage divider capacitive circuit. The capacitive sensors will be implemented on a substrate with pillar microstructures that were specifically designed for tunable adhesion. The sensors will provide feedback about whether the force applied to the object is adequate, hence controlling the adhesion of the grippers.

Ailu: a Sensorized Toy for Detection of Motor Impairments in Infants

Infants born preterm or with low birth weight have a high risk of motor impairments, such as cerebral palsy. It is important to identify these motor dysfunctions as early as possible in a child’s life because critical brain development takes place during the first year. Current high-validity tests for detection of developmental delays and impairments require a trained expert to perform a time-consuming examination. Ailu is an affordable and compact sensorized stuffed toy for detection of motor impairments in infants under 1 year of age. The toy is designed to encourage natural play through kicking and grasping. Pressure sensors and an IMU within the toy are used to measure the motor strength of an infant during play. The current iteration of Ailu is not ready for testing with infants because it lacks sensors in several critical places. A new circuit to accommodate the additional sensors was designed and tested. The components will later be placed within a soft cloth shell for data collection with infants.

The goal of this project is to develop a vision based stereo system that is capable of accurately measuring fast moving objects in the field of view. The approach that we are pursuing builds on two previously developed technologies: event based cameras and catadioptric stereo systems. Event based cameras track changes in light intensity using sensors that read data from each pixel asynchronously. These cameras provide high speed, low power, and a large dynamic range. However, these cameras are relatively new and expensive, so we propose a novel idea that merges the event camera with a catadioptric system which uses mirrors to create multiple virtual viewpoints, allowing for a single camera to mimic the effect of trinocular setup. A system that merges these two advances takes the benefits from both the reduced cost and complexity of a single camera and the strengths of event based vision. Finally, we propose a novel algorithm for stereo depth calculation using the timestamp and polarity of events to find the correspondence between the virtual viewpoints, which then allows for depth estimation.

Since various pathogens induce similar symptoms, identifying the causative agent requires co-detection of multiple agents. To address this need, the Penn team has designed a multiplexed assay and a device for molecular diagnostics. Conventional methods of identifying disease causing pathogens require rigorous sample preparation with complicated and expensive instruments, and operated by laboratory trained experts, thus making it necessary for the process to be done in lab. To address this shortcoming, the Penn team previously designed a self-seal capillary chip that can perform the 2-stage, nested-like, rapid isothermal amplification assay, dubbed rapid amplification (PENN RAMP). Since our device utilizes capillary valves that are limited in their holding pressure, there is the need to control the pressure at which liquids are introduced into the chip. This project therefore discusses the design and fabrication of a filling module that will eliminate the use of pipettes when filling the chip and provide easier operation of the chip for untrained non-laboratory users. The main forces that comes into consideration for the design inlet are surface tension and gravitational forces. We first calculated the critical height needed for the water channel using the Young-Laplace equation, then used Solidworks to design the inlet based on the precise specifications from previous calculations. After designing the part on solidworks, it was printed with a 3D printing machine and tested in the lab. Further research and design development activities are in place to improve on the size of the inlet and the efficiency.

With very few early onset symptoms, early detection of ovarian cancer has proved to be highly challenging. Most ovarian cancer patients are diagnosed after the cancer has metastasized, at which point the cancer is no longer easily treatable and the relative survival rate has significantly declined. The motivation for this study is to provide minimally invasive detection for ovarian cancer in earlier stages than currently available procedures. Cells produce volatile organic compounds (VOCs) metabolically, and due to more rapid metabolization, tumorous cancer cells release a measurable difference in VOC content. Due to the extreme sensitivity of carbon materials, this difference can be detected using carbon nanotube-based chemical sensor technology. An electronic sensor system measures responses from the carbon nanotube device, and with machine learning techniques, classifies the blood plasma samples as either healthy or diseased. The experiments detailed in this paper tested the reproducibility of the system, both the chemical sensor array design and the allocated samples as well as the algorithm’s ability to accurately correlate patterns in sensor output to healthy or diseased diagnosis. This same concept, the electronic sensing of VOCs using carbon materials can be applied to a wide array of diseases and infections and further the development of early detection and diagnostic devices.

My goal for my stay during the SUNFEST program was to learn more about designing and programming autonomous robots. Dr. Avi Cohen, my adviser at Pennovation, and I created a plan based on my goals that focused on manufacturing a system that would enable us to test new algorithms for control and environmental interactions for an aerial manipulator.  The next step was designing a low weight and low power thermal detection system that can identify and interact with choice objects. The objects in question being humans with other entities producing heat being a possibility. Embarking along this project, we started on two primary steps: creating parts that were designed to fit with an aerial manipulator and program a microcontroller connected to a thermal camera to provide us with usable ROS image messages. The end objective for our project is to create a dynamic model to operate with our ROS platform to be able to run.

Flying modular robots have the potential to rapidly form temporary structures. In the literature, docking actions rely on external systems and indoor infrastructures for relative pose estimation. In contrast to related work, we provide local estimation during the self-assembly process to avoid dependency on external systems. In this paper, we introduce Outdoor-ModQuad, a flying modular robot that is aimed to operate in outdoor environments. We propose a new robot design which operated on a vision-based docking method and GPS-based autonomous navigation. Our design is based on a quadrotor platform with onboard computation and visual perception. Our control method is able to accurately align modules for docking actions. Additionally, we present the dynamics and a geometric controller for the aerial modular system. Experiments validate the vision-based docking and GPS guidance methodology and resistance to external events with successful results.

Self-reconfiguring, shape-changing surfaces are a novel type of tangible interface that can morph into various objects with minimal control to represent palpable environments for a user. This type of interface is useful in a variety of applications, ranging from virtual reality to custom-fit apparel, but current methods for actuating such surfaces are bulky and unwieldy. We present a novel solution to the current issues with shape-changing surfaces by programming local stress into a tessellated surface so that each tessellation toggles between two states. Each binary tessellation would be controlled and contour the surface into a shape, similar to how pixels on a television are controlled to form an image. The individual tessellations are actuated using shape-memory alloy (SMA) coils that can be physically expanded but contract when heated. These coils are embedded into our surface, significantly reducing the size of the actuation and the overall thickness of our sheet. By integrating these coils, we will show that the bistable, tessellated surface can be controlled to form various shapes.

Graphene oxide (GO) is an oxidized form of graphene, which is synthesized via the oxidation of graphite flakes, through a process known as Hummers’ method. GO may be represented as a monolayer thick carbon lattice, similar to graphene, but with some oxygen and hydrogen groups covalently bonded to the lattice. GO is naturally an insulator, resulting in poor conductivity. However, by reducing GO through any of a variety of methods, GO may be converted into reduced graphene oxide (rGO), which is conductive and comparable to typical graphene films. Typically, GO is reduced via exposure to hydrazine or hydrazine vapor, but this poses health concerns, as hydrazine is highly toxic and explosive. Alternative reduction routes, such as thermal or electrochemical treatments, are either not scalable or are incompatible with polymeric materials necessary for the encapsulation of rGO devices. We discovered a novel method of reducing GO films with l-ascorbic acid (L-AA, vitamin-C), that is not only biocompatible, but also fast, as vitamin-C can reduce GO in a matter of minutes. To fully characterize the reduction of GO thin films using vitamin-C, transmission lines (TMLs) were assembled, as these structures are convenient for measurement, and since theories exist linking TML line resistance to resistivity, and so to conductivity and sheet resistance. We have obtained conductivity values from a working rGO TML of 2,776.20 S/m. Pristine graphene, by comparison, has a conductivity of 2,000 S/m.

Implantable Cardioverter Defibrillators (ICDs) are life-saving devices that terminate lethal heart arrhythmias. Discrimination algorithms are a core component of ICDs. These algorithms differentiate between potentially lethal Ventricular Tachycardia (VT) and non-lethal Supraventricular Tachycardia (SVT). Current discrimination algorithms are based on signal characteristics like morphology, cycle length, stability and more. These algorithms are static, and have fixed parameters that are tweaked in an infrequent manner by domain experts (physicians). Traditional algorithms have inappropriate therapy rates between 14-44%.

The aim of this work is to reduce the rate of inappropriate therapy through creation of more accurate discrimination algorithms. Data driven approaches to SVT/VT discrimination in ICDs have been difficult to pursue due to the small amount of labeled data. ICD signals, or electrograms (EGMs) come from inside the heart, and require surgery to obtain. We aim to convert this model to a spiking neural network, to realize energy savings.

We have developed a Convolutional Neural Network (CNN) based discriminator that provides improved performance on SVT/VT discrimination tasks. We solve the problem of lack of data by augmenting the real data with synthetic data generated from a heart model. The CNN was then converted to a Spiking Neural Network (SNN) to realize energy savings. These higher accuracy, energy-efficient SVT/VT discriminations can improve the quality and length of life for ICD wearers. Future work will focus on personalization of these algorithms to further improve the accuracy of discrimination algorithms.