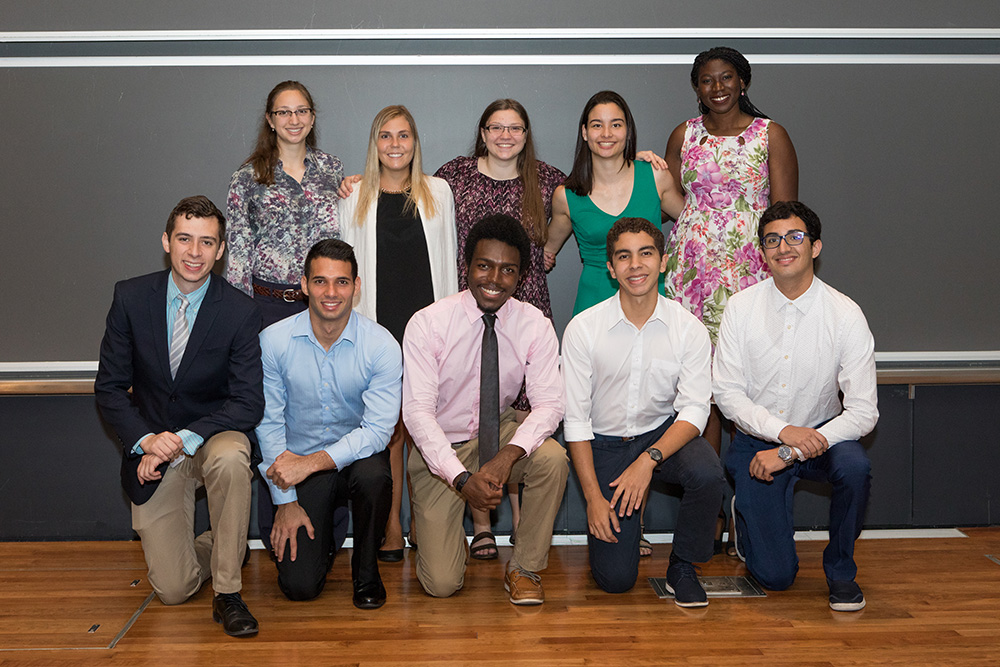 We fabricated a biosensor based on carbon nanotube field effect transistors (CNT-FETs) to sense for volatile organic compounds (VOCs) in samples of tear trips and blood plasma. The biosensor is composed of CNTs deposited on a silicon substrate. Then, it is functionalized with ssDNA to enhance the sensing process. In this process, mass flow controllers were employed to use nitrogen gas as a carrier for the VOCs. This transports them to a sealed chamber where gold coated pins contact the electrodes to collect the data, which was then used to construct a current (I) vs gate voltage (Vg) curve. A normalization process is used after data gathering to organize the groups of data (staph, healthy, and non-staph). To analyze the data, Linear Discriminant Analysis (LDA) was used, which is a transformation process to better separate each group of data.

Sodium-ion batteries present a promising potential alternative to lithium-ion batteries in that they are cheaper to fabricate and less taxing on the environment. This is possible because sodium is much more naturally abundant and easy to obtain and refine than lithium. However, sodium-ion batteries present their own challenges with the electrode materials and the electrolyte composition that must be solved before sodium-ion batteries can be commercially viable. Nanoporous tin is a material that is appealing to use as an anode in a sodium-ion battery, due to its high theoretical capacity for sodium ions. However, in practice, the brittle nanoporous structure cannot handle the drastic volume change that accompanies sodiation and de-sodiation during routine charge and discharge of the battery, and the anode will deteriorate over the course of a few short cycles. In this experiment, we test the ability of alumina to support the nanoporous tin through these volume changes. Alumina, or aluminum oxide, does not take part in the battery function and only provides structural support for the tin active material. The cycling stability of several different batteries with varying ratios of tin/alumina are tested and compared to a pure tin control battery.

To enable machines to work effectively alongside humans, there is a need for machines to be capable of learning from humans and learning in ways a human would. Machine learning methods allow a robot to model a system given data consisting of inputs and expected outputs. The Gaussian Process is a form of unsupervised learning when used to learn the correlation between inputs and outputs. In this research, the goal is to allow the robot to cooperatively carry objects with a human leader in an efficient and effective manner by minimizing forces and motions that do not contribute to navigation to the goal as well as avoiding obstacles. To accomplish this the robot is trained using a Gaussian Process to predict the motions the leader will make while carrying an object through a cluttered environment. This is done by observing two humans cooperatively carrying and constructing a model prior based on this data. Successful modeling of expected motion will result in quicker and smoother travel and decrease the energy required to cooperatively transport an object.

Programmable matter is a class of intelligent material that can change its physical shape to achieve a wide range of functionalities. This paper aims to produce programmable matter using autonomously folded origami hyperbolic-paraboloids (hypars). This approach uses tessellated hypar units to achieve different shapes. We explore a 2×2 tessellation that can achieve 6 distinct shapes. We are able to autonomously fold the tessellations into an initial shape using heat-sensitive actuation. These preliminary results will be a foundation for developing more extensive actuating methods to allow for reconfiguration past the initial folds.

Network Control Theory of Electric Stimuli: A Quantitative Model of How Stimulation Propagation Along the Cortical Surface Changes Brain Activity

The University of Texas at Dallas, Bioengineering

Tuberculosis (TB) is a bacterial infection of the lungs that affects one fourth of the world’s population and is amongst the top ten causes of death worldwide, according to the Center for Disease Control and Prevention (CDC). Currently, the diagnostic procedure for a TB infection requires a skin test or blood test using expensive laboratory equipment. However, due to poor conditions of health care​ ​facilities found in the leading TB countries and/or the distance of these facilities from infected populations, a portable, inexpensive and non-invasive diagnostic tool is needed for early detection of a TB infection. My research this summer focused on the creation of a handheld device that could use a biomarker found in the whole blood to detect TB. The biomarker of choice was outer membrane vesicles from the Mycobacterium tuberculosis that can be found in an infected patient’s blood. I designed, manufactured and tested a small (50mm x 50mm) microfluidic chip that isolated these membrane vesicles and a cell phone based platform for detecting the membrane vesicles using imposed fluorescent signals.

A new nanomaterial called MXene presents the opportunity for higher resolution electrocorticography (ECoG) electrodes, which are commonly used for sensing and recording activity in the brains of epileptic patients prior to surgery. MXene’s high conductivity and hydrophilic surface renders it a strong candidate for biological sensing applications of this type. MXene electrodes achieved significantly lower impedance than comparable gold or graphene electrodes, leading to improved signal quality when recording brain activity acutely in an in vivo mouse model. However, the stability of the MXene electrodes, which is necessary to understand before attempting chronic implantation, has not yet been studied. In this project, we study the ways in which the electrical properties of the MXene ECoG electrodes change over time, particularly when placed for several days to weeks in a simulated brain environment. For comparison purposes, data was also collected for devices remaining in air over similar time frames. Electrochemical impedance spectroscopy (EIS) testing, occurring daily, was used to measure the phase and impedance of each electrode channel for frequencies ranging from 1kHz to 1MHz. By analyzing the results from EIS testing, we can begin to characterize the stability of the MXene ECoG electrodes, allowing us to better understand how long the electrodes can remain in the brain while successfully detecting neurological signals.

The University of Texas at El Paso, Mechanical Engineering

This paper deals with a new type of underactuated gripper that can perform an enveloping grasp on a wide range of objects of different shapes, sizes, masses, and orientations. This gripper consists of a repeating module, connected by a series of latches and locks on each module, which ensures that a module only assists in the grasp once the module preceding it has made contact with the object, and can be simply actuated by a pair of motors, for as many modules as desired. This gripper has great adaptability and scalability, as the individual modules can easily be adjusted individually and assembled into form.

Image semantic segmentation: A comparison between color and grayscale images

Image semantic segmentation plays an important role in scene understanding; therefore, it has been of great interest for computer vision and machine learning. Specifically, applications for indoor navigation of autonomous aerial vehicles demand more efficient and accurate systems due to the desired small size of these flying devices to easily maneuver and increase their flying time. Being aware that using grayscale instead of color images conduces to a considerable reduction in computational requirements and simpler algorithms which traduces in less complex hardware, in this paper we explore the difference between using color or grayscale images while performing image semantic segmentation using deep learning. Our main objective is to notice whether dismissing the information contained in color images will affect the accuracy of the system. With this aim, our paper exposes experimental results utilizing the popular CIFAR10 and CITYSCAPES datasets and well-known convolutional neural networks such as ERFNet and ResNet to produce semantic segmentation on color and grayscale images. We finally, stablish a quantitative comparison between the results and draw conclusions on our work, its implications, and future considerations.

In order to address the environmental challenge of obtaining fresh water, it is of interest to develop simple methods for the condensation of water from humid air. By taking advantage of the known energetic favorability of heterogeneous nucleation over homogeneous, specially patterned surfaces can be designed for optimal water collection. We aim to use computational fluid dynamics (CFD) simulations to model the condensation of water from flowing air as the first step in designing such surfaces. In the interest of building future simulations that accurately represent condensation processes, much of the project was focused on verifying model results with those from previously published papers. Using ANSYS Fluent CFD software, models of several cylindrical condensation chambers were constructed, and physical quantities relevant to condensation were studied. It was found that in modeling real systems, small changes in material properties and system conditions can heavily influence the saturation field, and therefore, how much liquid is able to be collected. Temperature in particular was observed to have a relatively large impact on the systems modeled. With this foundation, the project can further progress toward modeling the phase change of water onto surfaces of varying patterns.